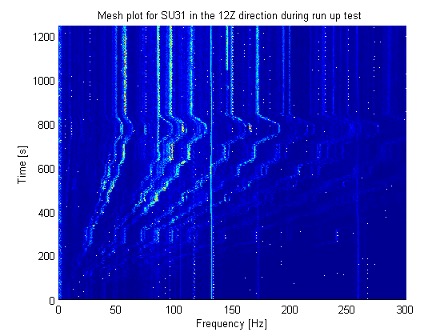 Vibration monitoring is a flexible and robust method for detecting and diagnosing faults in moving machinery.  It is critical for the analyst to have clear understanding of the vibration signal being analysed and the tools at their disposal.  This post serves to explain the differences between stationary and non-stationary vibration signals and the tools available to analyse them.

Examples of equipment which produce non-stationary vibration responses are:

Stationary vibration signals can be analysed using standard spectral analysis tools such as the Fast Fourier Transform (FFT) and the Power Spectral Density (PSD).  Due to the time-dependent nature of non-stationary signals, these tools are not applicable.  Hence, if a signal is incorrectly classified and the wrong tools is used, erroneous results will be produced.

At Investmech, two tools are used to analyse non-stationary vibration signals namely, the peak hold approach and the waterfall approach.  Both approaches divide the signal into windows of specified length and assume the signal within each window to be stationary thus allowing the standard spectral analysis tools to be used.  The peak hold approach keeps the maximum value along the spectrum of all windows.  The basic approach is illustrated in Figure 2.  The signal with three dominant frequencies which vary with time was divided into three windows.  The PSD of each window was computed and plotted, and it is displayed that each window can only detect two of the three frequencies.  However, by implementing the peak hold approach the frequency and magnitude of all three dominant frequencies can be detected.

The waterfall method (also known as Short Time Fourier Transform or spectrogram) is generally a 3D representation of the spectrum over time.  The spectrum of each window is presented in a waterfall or cascade plot.  An example of a waterfall plot is given in Figure 3.  The plot was generated from vibration measurements conducted on a paper mill during start up.  It clearly illustrates the dominant frequencies increasing with time as the mill increases in speed up until it reaches its maximum operating speed.

In conclusion, it is critical that vibration analysts are able to accurately identify the signal they are evaluating and then select the suitable tools.  Evaluating vibration signals with the incorrect tools can lead to misdetection of faults.  There are many powerful tools for evaluating non-stationary vibration signals however, it is vital the analyst understands the tools and correctly implements them to ensure accurate results.

Next: A guide to (start) meshing like a pro → 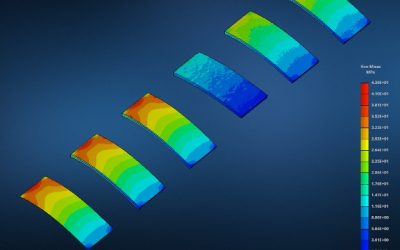 Meshing is an aspect of finite element analysis that sometimes gets overlooked by FE analysts, particularly those with the luxury of comparatively small models and/or powerful computing resources available. This is a quick guide on meshing like a pro.

By viewing this website you hereby acknowledge that you have read the Investmech Privacy Statement.  You understand and agree that all information provided, whether personal or otherwise, may be used, processed by Investmech (Pty) Ltd and such use may include placing such information in the public domain.

This website uses cookies so that we can provide you with the best user experience possible. Cookie information is stored in your browser and performs functions such as recognising you when you return to our website and helping our team to understand which sections of the website you find most interesting and useful.

Strictly Necessary Cookie should be enabled at all times so that we can save your preferences for cookie settings.

If you disable this cookie, we will not be able to save your preferences. This means that every time you visit this website you will need to enable or disable cookies again.